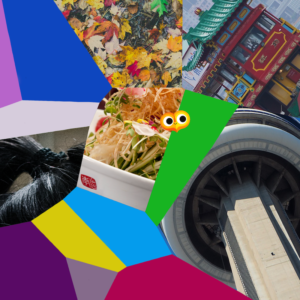 This week’s Celebrity SESQUATCH is the chef, restaurateur and master of fusion cuisine, Susur Lee!

Susur Lee is a chef and restaurateur who received the prestigious CAA Five Diamond Award in Cannes, France, and was named by Food & Wine magazine as one of the “ten chefs of the millennium.” Based in Toronto, Susur Lee is a celebrated pioneer of modern Chinese cuisine and “fusion” cooking.

Lee was born in Hong Kong, where he got his first restaurant job at age 14, as a dishwasher at a Pekingese restaurant. After falling in love with the tools and sounds of the kitchen, Lee began an apprenticeship at the Peninsula Hotel in Hong Kong when he was 16. There he absorbed the art of European cuisine, rising to the position of chef saucier by the time he was 19 years old.

Lee immigrated to Toronto in 1978 and continued cooking and working his way up to the executive chef spot at a number of restaurants. In 1987, he opened his first restaurant, Lotus. There he blended Chinese cuisine and culinary tradition with European techniques. The tasting menu at the 12-table restaurant won him accolades from food critics around the world, including Zagat’s proclamation of Lee as a “culinary genius.” After a decade of rave reviews, Lee closed Lotus, taking three years off to “re-energize” in Singapore.

In 2000, he returned to Toronto and opened Susur. Such mouth-watering and inventive dishes as Lee’s famous lobster with black truffles, Qianpang Xie-style egg white and uni sauces and crispy dried scallops drew deep-pocketed foodies and critics from around the world. In 2004, he opened Lee, a more affordable and casual restaurant. At the peak of its eight-year run, Susur made Restaurant magazine’s list of the world’s 50 best restaurants and helped Lee earn a place as one of Food & Wine magazine’s “Ten chefs of the Millennium.”

In 2006, Lee became the second Canadian chef to appear in the Food Network’s hit show, Iron Chef America, tying with Iron Chef Bobby Flay. In 2010, Lee battled for the title of Top Chef: Masters on Bravo TV, where he tied for second place in the season finale

Since 2010, Lee has collaborated with his sons to open the Toronto restaurant Bent, appeared as one of the judges on Chopped Canada, opened the restaurant Luckee, a modern Chinese restaurant in Toronto’s SoHo Metropolitan Hotel, and worked with Drake to open the restaurant, Frings. He has raised funds for the James Beard Foundation, The Centre for Addiction and Mental Health, and regularly lends his skills to charity events.

Where is home to you?
Toronto.

Where were you born?
Hong Kong.

Which season do you like best?
Fall because of the seasonality of produce in Canada. It’s a great time of change with the good spirits of summer and the freshness of fall. It’s a great season to cook.

What’s your idea of a good time?
Cooking in my kitchen my family’s favourite dishes.

Is your glass half full, or half empty?
Half full.

How do you celebrate Canada Day?
Join in the crowd and watch a fireworks show.

How do you say, “Welcome” in your first language?
歡迎 (fùnyìhn)

What are you most known for?​
My fusion cooking.