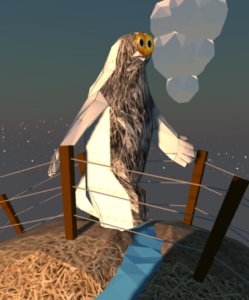 SESQUI needed a mascot character designed – a SESQUATCH – for the sesquicentennial. In the past, I’ve done a fair bit of personal, fun work dealing with crypto-zoological creatures and monsters, notably Bigfoot, which I’ve always kind of had a little bit of an obsession with since I was a little kid.

When I was about 12 years old I found what I believe, and possibly still do believe, were footprints. I was just going through the woods by myself one day and I just came across them. As any 12 year old boy would be, I was just amazed and shocked and interested. I was in my hometown of Barrie, Ontario, and I lived on sort of the edge of town, so I was actually quite surrounded by forests and fields and steams and nature. And I was walking on a path in the forest one day by myself. It was probably March, and I remember it because it was one of those first Spring days where it kind of gets really warm and you know, you‘ve got to get outside. So I was walking along and I stopped dead in my tracks because I saw these footprints. And I looked at them closely and I thought “I wonder if it’s a bear?” – you’ve got to be a little bit worried if there’s a bear around. But, I’d never heard of anybody seeing any bears around the neighbourhood, so I got down on my hands and knees and looked at yes, they were big.

They were what you’d expect Sasquatch footprints to look like – big, big footprints. And they were really detailed because the ground it walked on was really soft and kind of muddy so you could actually see where the mud squished up between it’s toes, that’s how detailed it was. It was pretty exciting. There might have only been about two footprints and then they kind of went off in a direction where the ground wasn’t so soft, so I kind of lost the track. And I thought this was amazing, so I went home and when I was walking home it hit me “Oh my God, there’s a Bigfoot waking around!” I was so scared that I went home and I hid in a closet or hid under my covers.